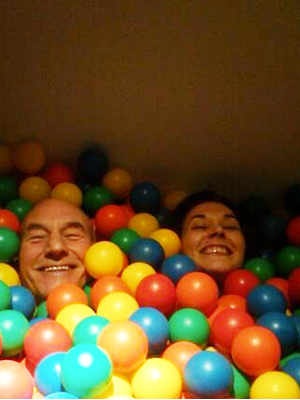 You can thank Sir Patrick Stewart for raising the wedding photography bar to a level of authenticity we’ll never, ever be able to attain. For most, a simple over-the-shoulder smile at the overpriced wedding photographer is enough to suffice a “Just Married” announcement. That’s way too blasé for P. Stew — he’s a Sir, for Queen’s sake! And, in true Sir fashion, he’s taken the road less basic, and bestowed upon us a gem of a wedding photo. Behold, from the depths of what seems to be his favorite ball pit, P. Stew and Sunny Ozell emerge to announce they’ve tied the knot.

Now, before you go thinking that anyone can jump into a ball pit and pronounce they’re happily married, consider the idea that Sir Ian McKellen (a.k.a. Gandalf, a.k.a. Magneto) probably took the photo. Since McKellen announced over Facebook that he officiated the marriage, it’s safe to assume he snapped the pic. Which, if our nerd-girl fantasy were to ever be true, makes this wedding totally, and unattainably, awesome.