Here’s something that could very well be the “next big thing” in wedding photography: slow motion photo booths. Check out the hilarious video above for an example of what one such booth recently produced.

This particular reel was created by Seattle-based video production group Super Frog Saves Tokyo (SFST) at the wedding of Quang and Ellie. The heart of the booth was a RED Epic camera worth tens of thousands of dollars, a 18-50mm RED lens, and a monitor. There was also a white backdrop, random props for the guests, and four Konova 900 LED lights illuminating the booth.

SFST says that everything was shot at 160 frames per second, and that takes guests a little time to understand and warm up to the idea of slow motion footage:

We just made sure the look was clean in camera and then did color correcting afterwards. Blaine Ludy (Director/Editor of this project) is just really great at getting people to do stuff. In the beginning, people were timid, but as he showed them takes they began to understand what we were doing. Also, it was a wedding with an open bar. The video is edited (mostly) chronologically so you can see people get progressively less inhibited as the night went on.

The group also says that they’ve been receiving more requests to have this type of slow-mo booth set up at other events. We’re guessing they’ll soon find themselves with the phone ringing off the hook as this type of video goes viral on the Web.

via Slow-Motion Photo Booths: The Next Big Thing in Wedding Photography?. 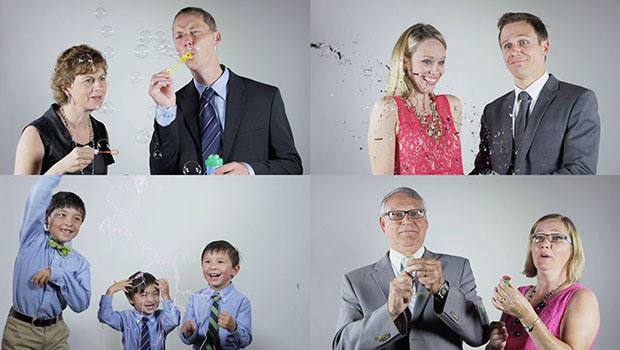