Why and when did you decide that you wanted to get into wedding photography?

I became fed up of working the nine to five; I am quite a creative individual and prefer to create pieces of art and more self-fulfilling work. When you work nine to five you’re told what to do and have no freedom of expression so when it comes down to it and doing what I do now, it was a natural progression.

I used to sell on eBay for a living and a successfully did it for several years but the only people I would ever really see was the guy down the post office and the only communication I would have with others would be over email. There was no person to person interaction and after a while it was soul destroying. I started doing Photography as a way of being creatively expressive and from that I started doing weddings. Shooting a wedding for two people in love is the best way to give yourself a feel good factor. Everywhere you go, everyone is in a good mood and happy all the time. It makes you a better person because of it. I was a right miserable so and so six years ago and the change in me is quite dramatic. It’s the best thing anyone can do!

I was approached by Kimberly and Michael over their wedding because I’m one of the preferredsuppliers for Buxted Park. It was already becoming a little bit interesting because she has a horse and she wanted to have some shots with it. The T Rex shot was never planned in advance and was a special request on the day. I don’t want to be a clichéd photographer and go in with an array of pictures that I’m going to take, I work very much on the fly n a relaxed way and take the day as it comes. The girls initially wanted to do a barefoot running shot and someone suggested doing the T rex chasing shotinstead. I framed the shot working out if it would be a credible, viable shot to do. We never expected it to come out quite as good as it did. It is a big T rex!

I have to be very careful when I do this sort of work because I don’t want to be the photographer who does the old clichéd work such as spot colour or the deep vintage blue washes which were in last year and already dated now. I try to be as creative, kooky and true to the couple as I can be.. 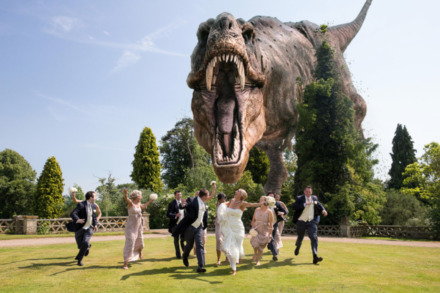